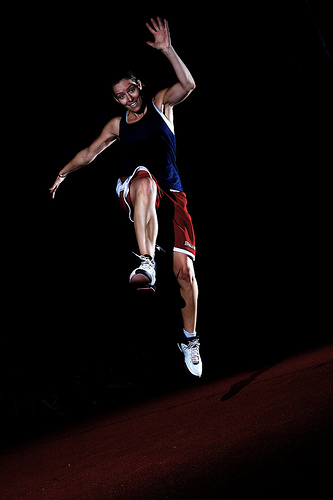 Ankle and foot injuries account for 16-30% off all sports injuries, resulting in significant loss of playing time and medical costs. Within the ankle are several joints collectively called the ankle complex or the talocrural joint. Chiropractors and other manual therapists frequently use traction, high-velocity, low amplitude manipulation of talocrural joint to alleviate ankle and foot injuries. Despite the popularity of such treatments, there has been little scientific research on the effects of ankle adjustments in athletes.

Researchers publishing in the Journal of Manipulative and Physiological Therapeutics sought to fill this gap in knowledge by conducting a randomized, assessor-blinded clinical pilot trial. Nineteen female handball athletes were randomly assigned to receive either chiropractic adjustments or a sham treatment for three weeks. By the end of treatment, the chiropractic patients had significantly better improvements in vertical jumping height.

Jumping heights were measured by an optoelectronic infrared system that consisted of two parallel bars positioned opposite of each other. The athlete was instructed to jump while standing between the two bars, and the system measured the flight time with the precision of 0.001 seconds. After three jumps, the output was averaged and converted to centimeters. The chiropractic patients had a 1.07 cm improvement in jump height, compared to a 0.59 cm improvement in the control group.

The authors of the study say that large randomized clinical trials are needed to confirm the results. However the preliminary research is promising for athletes looking for non-invasive ways to cope with chronic ankle concerns.